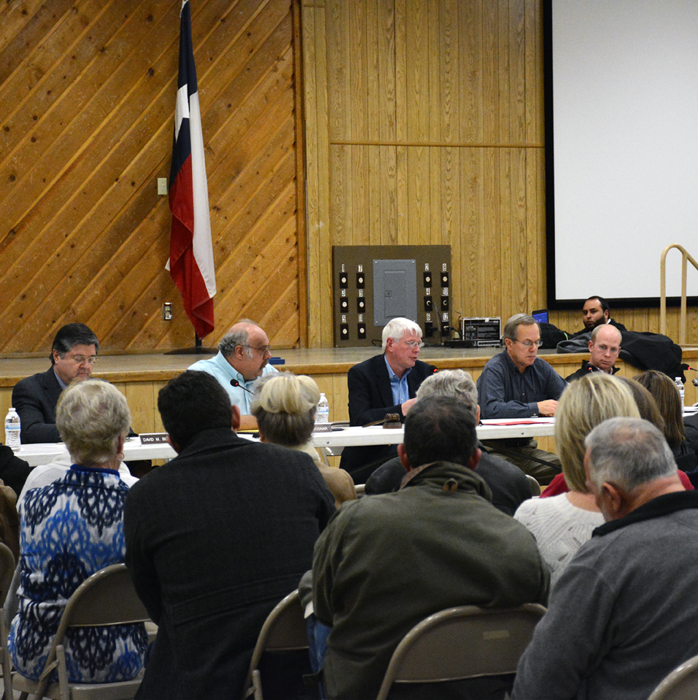 Above: About 150 people met with the Dumas City Commission at the Moore County Community Building to discuss the governing of Dumas’ traffic.

Some people who attended the public forum Monday to discuss Dumas’ cratered main street and a possible relief route told the Dumas City Commission to make a decision, and it’s not the first time they’ve heard it. TxDOT also is waiting for officials to tell them what their plans are to address the growing traffic on Dumas Avenue.

No one is taking the issue lightly, but the officials’ foot dragging has ensured the potholes on Dumas Avenue will get bigger and continue to infect larger sections of the street. Also, some people believe the officials’ inability to decide what to do about a relief route could the put Dumas at risk of TxDOT at some point deciding to build one so far from the city that it will seal Dumas’ economic decline. Others disagree, saying any bypass would launch the decline. And, the officials continue to wring their hands.

The motel owners told the commission that 40 percent of their income comes from walk-ins, and a bypass would drastically decrease that revenue. Other business owners said the traffic that’s funneled through Dumas, especially the semitrailers, keeps people from their businesses.

Some people questioned the effect a relief route would have on hotel room occupancy, saying people make reservations ahead of time, and even if there is a bypass, there still would be access to the hotels. The discussion continued to seesaw from what to do with Dumas Avenue to the relief route.

TxDOT plans to cover Dumas Avenue with concrete, and they’ve put the project on their 2018 calendar. They’ll go forward with it no matter what Dumas decides, but TxDOT wants local officials to tell them if they want a relief route because that decision will affect the engineering of the concrete on Dumas Avenue. But even the mention of concrete sends teeth to gnashing. People want to know how long it would take TxDOT to cement 1st Street to the city’s southern city limits. How many blocks will be done at a time? Who will be responsible for possible damages to businesses during the project?

Dwight Brandt of Brandt Engineers Group Ltd, a firm the city of Dumas contracts with, said contractors have to carry liability insurance, and they’d be responsible for damages such as broken glass.

Throughout the discussion, the pendulum swung from the concrete project to the relief route, and each swing put more pressure on the local officials to act.

Former state Representative David Swinford, long an opponent of a relief route, said he recently attended a meeting in which officials discussed taking Interstate 27 from Amarillo to Denver, and he said if local officials want to see Dumas thrive, they have to do some long-term thinking.

“The only way I’d be for a relief route is if we build a corridor that will bring I27 this way,” Swinford said.

“I was raised to be against relief routes, but as long as we have a game plan, we’re ahead,” Rhoades said. “If the businesses could help come up with ideas to address some of the concerns, then that’s something else that keeps us ahead.”

A business owner said she’s concerned about handicap access to her store and how the concrete construction would impede all access, given that her building and some of the others can’t use their back doors to allow customer entry. Another owner said he could survive a shutdown for a month, but not for five.

TxDOT has said concrete and a relief route can be planned simultaneously, and temporary repair on the Dumas Avenue’s asphalt can be done during the planning. Without any planning, the heavy traffic continues to damage the street, and locals said they’re tired of it.

Commissioner Steve Bodnar said TxDOT has asked Dumas officials to tell them where they would want a relief route and determine where they want the exits — for example, one of them giving travelers access to the hotels. The two-lane route would swing away from Highway 87 south of Dumas and then reconnect to Highway 287 north of the city.

All of the construction incurs great costs, and the people at the forum wanted to know what it would cost them. City Manager Arbie Taylor said utilizes would have to be moved, but the city is sending an affidavit to TxDOT affirming the utilities were in place when TxDOT took possession of the street in 1932. If TxDOT’s attorneys accept the proof, then they would shoulder the costs of moving the utilities.

The forum wasn’t the first time business owners, residents and the commission have talked about concrete and a relief route, but some want it to be the last.