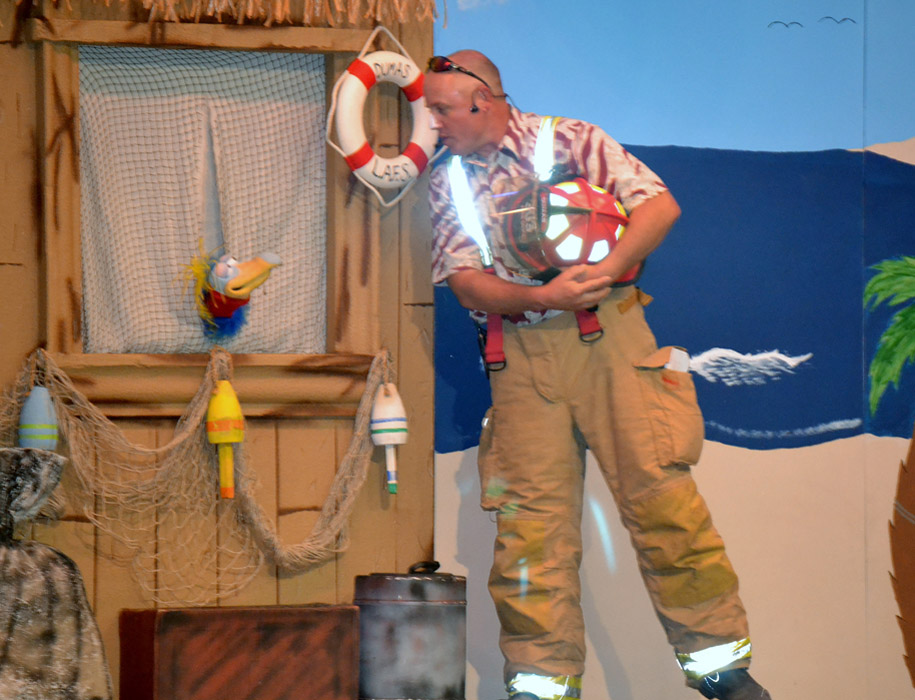 Above: Dumas Fire Capt. Galen Davis talks to Bird during a performance at Morningside Elementary School on Tuesday. The firefighters put on a skit to teach elementary students about fire safety and protection. This is the 8th year they’ve done it.

The same Dumas firefighters who can carry you out of a burning building on their shoulders, the same ones who brave scorching heat to save structures and lives, at the risk of their own, also have a brilliant, comical side. Who knew?

Throughout the week, firefighters with the Dumas Fire Department are teaching elementary school children about fire safety and prevention, but they’re not doing it through dull lectures with PowerPoint presentations. Instead, the life-saving information is presented through a well-crafted skit, using stage sets, a script, clown makeup and a total immersion into the characters they’re playing. They’re as serious about teaching kids about fire safety as they are about fighting fires, and they’re doing it through gut-busting comedy.

For about an hour each day this week, Billy Bob Touchstone, Lt. Anthony Anderson, Tatum Cartrite, Kelly Davis and Capt. Galen Davis step out of their serious firefighter roles and transform themselves into clowns. Literally. Well, actually, Anderson becomes a witty bird who pokes his head out from behind a curtain to engage in conversation with the other characters in a performance that would do Sesame Street proud. The men are serious firefighters, but they’re also serious performers.

How serious? They’ve been going to a clown school designed for firefighters every year for the eight years they’ve been performing for the Moore County schools. And the first firefighter to go was the last one Dumas Fire Chief Paul Jenkins expected to want to go.

“You have to know Capt. Galen Davis,” Jenkins said. “He’s serious and doesn’t have much to say anytime to anyone, so when he told me he wanted to go to clown school, my jaw dropped. I never would have thought he would do it.”

But he did, and each year two firefighters attend clown school to hone the skills they use to teach children about fire safety. There was one firefighter, though, whose decision to go to clown school didn’t surprise anyone. When Touchstone told his daughter he was going to clown school, her response summed up the personality he’s known for.

“You could be the valedictorian!” she said.

Touchstone looms above the other firefighter/clowns on stage, walking on stilts and sporting shoulder-length orange hair and a clown nose. The clowns engage the students, drawing them into the performance — all the while teaching them about fire safety.

Touchstone said when they have tours of the fire station, the kids will bring up something they learned during the comedy skits.“They remember,” he said.

While the firefighters sometimes wander from the script and ad-lib, the preparation for the skit is months in the making. They begin making the sets and outlining a script about three months before the performances begin. And they rehearse — as if they were about to open on a national stage.

“We’re serious about it,” Anderson said. “We go through all the preparation, knowing it’s going to help make the kids safe. And we have a blast.”

The kids have a blast, too. They sit with rapturous faces, eyes glued to the clowns and taking part in the performance. The kids sing, they dance, and some of them get on stage, as comfortable with acting clownish as the firefighters are. The clowns’ comedic timing is perfect, and even when one of them migrates from the script, the others don’t miss a beat, never losing the rhythm and never losing the kids’ attention. Off to the side, Moore County Emergency Management Coordinator Tommy Brooks manages the sound effects and music that gives the performance a punch.

This year, the firefighters designed their skit around the theme “Hear the beep where you sleep.” They used comedy to teach the kids about smoke detectors and how to maintain them. They also brought kids on stage to take part in a skit that teaches them to stay low when there’s smoke, going through the teaching with a Caribbean-beat song. The kids loved it.

“The results have been phenomenal,” Anderson said. “We work closely with the schools, and they’re great about letting us come and do this. It’s just great.”

During the skits, it’s difficult to tell who’s having the most fun, the firefighters or the kids.

“It’s a good job when you can have fun doing what you’re doing,” Anderson said.