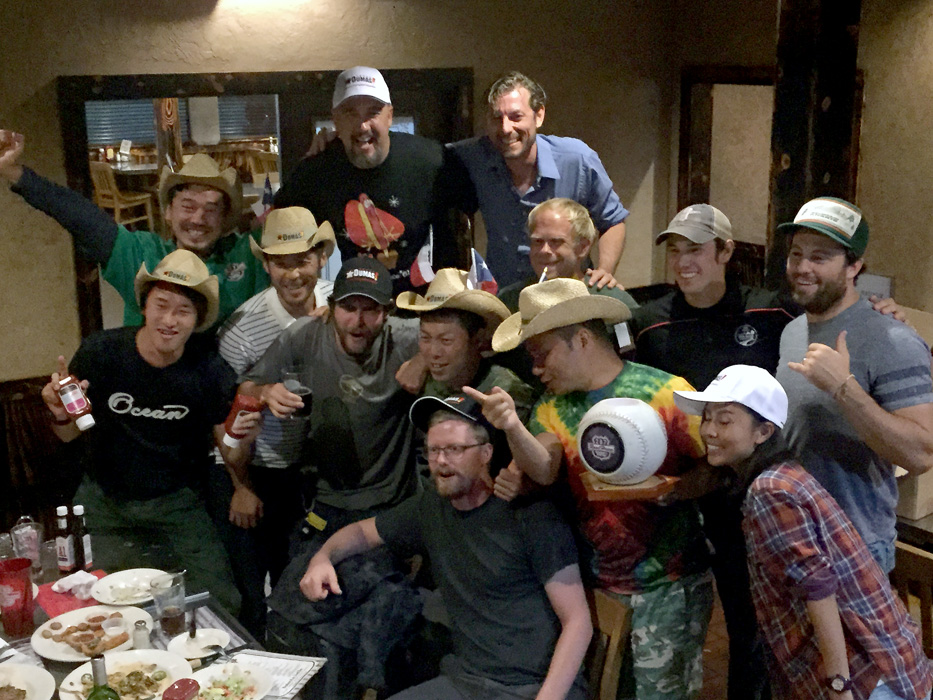 Above: Members of Toyota’s marketing department flew in from Japan to film a commercial in Dumas on Friday and Saturday. They were treated to a dinner at the 287 Roadhouse along with members of the production crew of Aspen Productions. (Photo Courtesy DEDC)

The next time you see a Toyota commercial, and you think some of the scenery looks familiar, it might not be your imagination. Crews were in Dumas on Friday and Saturday filming at several locations around and outside the city, and as word-of-mouth in the film industry promotes Dumas’ hospitality, there could be more filming here.

“Toyota was looking for scenes around the country that represent their users,” Dumas Economic Development Corporation Executive Director Mike Running said. “They also did some filming in New York City and other sites.”

It began when the Texas Film Commission contacted Running in July, looking for sites for the Toyota commercial. They were looking for locations people associate with this part of the country — grain elevators and cattle, which Dumas isn’t short of. Running sent pictures of possible locations, and the Japan-based marketing team began Googling images of the area.

When members of Aspen Productions came to Dumas to look at the sites, Running arranged for them to go up in a crop duster to get an aerial view. The Dumas hospitality kicked in, and the production crew got excited about the help Running and the community was giving them. It helped that they liked the sites, and they told Running they had never been treated with the hospitality Dumas rolled out for them, and they’d be back.

It wasn’t the first time Dumas was acknowledged for its “y’all come back” attitude. Running recently attended a conference in Waxahachie hosted by Film Friendly Texas, and the producer of “Kreep”, a movie filmed in Dumas during the summer was one of the panelists.

“People from other cities were asking him what did they need to do to draw the film industry to their cities, and the producer said, ‘You need to talk to Dumas, Texas, because they did it the best we’ve seen.’”

Running said the filming for Toyota’s commercial had its funny moments. Some of the shots were done in the middle of cattle herds, and members of the production crew from New York City had never been that close to a cow, and the bovines, not accustomed to stage directions, needed to be moved into place.

“The city guys were a little afraid to get too close to the cattle,” Running said.

But other members of the team were enchanted with Dumas and all of its agricultural and livestock charms.

“Members of Toyota’s marketing department from Japan were here, and they fell in love with Dumas,” Running said. “They were extremely exited because the Japanese have an infatuation with anything Texas.”

The Japanese were treated to a dinner at the 287 Roadhouse, where they donned cowboy hats and went native, and Running is counting on them to spread the word about their experiences in Dumas.

“We’re working on getting more filming like this done in Dumas,” Running said. “The film industry is a small world, so word-of-mouth is important. Our hospitality is an important marketing tool, but it’s genuine. That’s going to get us more attention.”