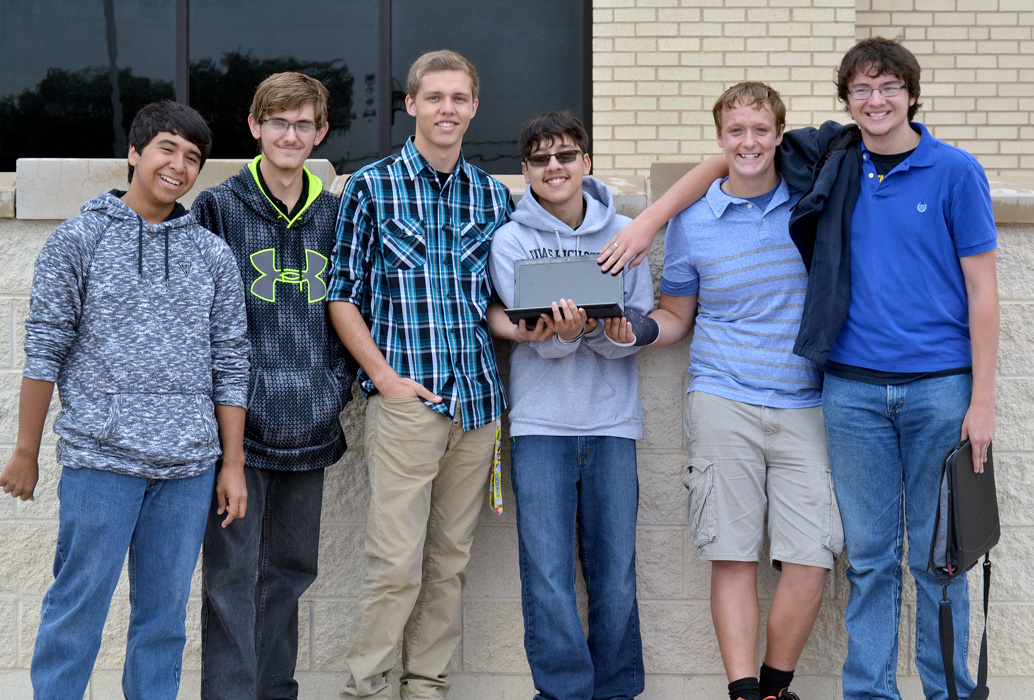 Above: DHS juniors Julian Jacquez, Dugan Akins, Chase Brady, Eli Torres, Jacob Long and Jeff Gross unlocked five codes that gave them the password to a Chromebook in the Chrome Breaker Challenge this week at DHS.

Editor’s Note: This story has been updated:

It was Mission Impossible, A Beautiful Mind and maybe a little James Bond suspense thrown in at Dumas High School this week. The mission? Use analytical and mathematical skills to break a series of codes, the last one of them a password to a laptop the winners would keep.

Six junior boys successfully worked their way through the five steps of the Code Breaker Challenge, each one more difficult than the previous one, to give them the password to the laptop, and they did it in two days. DISD Director of Technology Michael Keough designed the challenge over the weekend as a way to get students to think outside of the general curriculum.

“I want them to take charge of their learning,” Keough said. “I was thinking how can I motivate the students, how can I design new programs for them? In this challenge, they had to figure out their own sources and methodology.”

Julian Jacquez, Dugan Akins, Chase Brady, Eli Torres, Jacob Long and Jeff Gross, all juniors, teamed up to compete against other students who were working to win the laptop.

“The first one was pretty easy,” Brady said. “It was a Caesar cipher. The second one was a binary sequence that gave us four numbers to unlock a locker.”

Inside that locker, the students found a YouTube link that when deciphered gave them the coordinates to a box that contained two lines of letter. When they unraveled that code, it told them to look in a brown book inside the technology office where they found symbols that represented letters. When they solved that code, they finally had the password to unlock the ChromeBook.

The winning students credited Torres and Brady with doing most of the work, and when they won, they gave the ChromeBook to Long.

“His old laptop wasn’t any good,” Brady said. “He couldn’t do his homework or anything else on it.”

From the design of the challenge to the students breaking the codes, it all took less than a week, and Keough plans to do it again through the year — or as many times as he can get businesses to donate the ChromeBooks.

“I put it out there on Facebook what I was doing, and I quickly had a couple of businesses say they wanted to support the challenge,” Keough said. “OJD Engineering out of Amarillo donated the first ChromeBook, and Santos Concrete in Dumas also is donating one.”

Keough said the DISD is trying to implement a one-to-one Chrome initiative where each student would get a laptop and keep it for the school year.

“That’s where we want to be,” Keough said. “In order to do that, we have to get teachers familiar with Google and ChromeBooks and get the kids excited about ChromeBooks.”

A doctoral student working on educational technology, who is interviewing school districts in the area about technology leadership, told Keough Dumas is the only school doing something like the Code Breaker Challenge.

“The students are learning what we’re tying to implement through these challenges,” Keough said. “We can’t teach the way we used to. In this challenge, the students found the formulas on their own, they took charge of their own teaching, and that’s exactly what we’re trying to do.”

James Bond would have been proud.