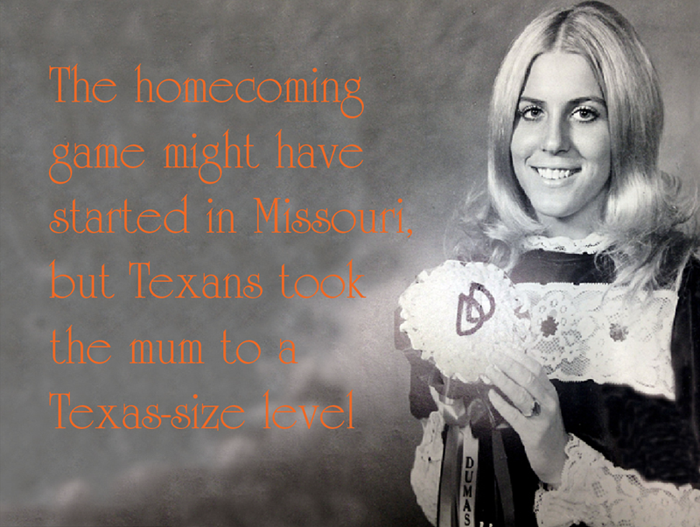 Above: When Linda Cooper was crowned Dumas High School Homecoming Queen in 1973, mums had little embellishment save for ribbons and the double “D” on the fresh flower. Today, they literally have all kinds of bells and whistles.

Try to describe a homecoming mum to someone from another state, and you might get a blank stare, like you’re trying to explain snow to someone who’s never seen it. Although, the NCAA credits the University of Missouri as the birthplace of the homecoming game, it was bigger-than-life Texans who took the mum to the colossal level we know. For almost 100 years, only Texas girls wore homecoming mums, but copycats in Oklahoma and Louisiana have recently been seen wearing them, according to the mumshop.com. Still, Texans do it up bigger.

“Even though homecoming mums have cropped up in other states, like most things, they are still bigger in Texas,” the website says. Just ask James McAlister of Flowers Etc.

“Some of the mums are small, and some of them are huge,” he said, “but one of the biggest changes in the homecoming mums over the years is we don’t use fresh flowers anymore. They’re silk now. We used to get those huge chrysanthemums from California, but they’re expensive to grow, and it takes a lot of babysitting them to get the plants to produce the big blooms. Also, the girls like to keep their mums, and the silk ones hold up forever.”

But one thing hasn’t changed over the decades, McAlister said: the boys still drag their feet about ordering the mums.

“We get frantic mothers coming in at the last minute to place an order because their sons told them the night before homecoming they need mums,” McAlister said. “It’s been that way for all the years I’ve been doing this.”

McAlister said the Dumas flower shops used to create every mum pinned to the girls’ dresses, but many people now fashion their own, embellishing them with dozens of charms, trinkets, cowbells, lights, stuffed animals and even music, such as the school’s fight song.

McAlister remembers one year in the late 1970s, the shop he was working in made over 400 homecoming mums, but this year he and his staff made about 200. Craft stores sell all the adornments, and imaginative mothers and their daughters fashion mums ranging in length from about 12 inches to some that drag the ground.

“Years past, when the Centuryettes and the Clubettes sold the mums, they were a pretty standard size, but now they’re all over the place,” McAlister said.

Another thing that’s different from decades past is that boys now wear their version of the mum: the garter.

“We make as many garters for the boys as we do mums for the girls,” McAlister said. “The girls come in early and put their orders in, but like I was saying, the boys wait until the last minute.”

On Thursday, a young man from Fritch picked up a mum for a friend who had frantically ordered it at the last minute. McAlister was out of some of the Fritch trinkets and ribbons, but his creativity kicked in, and he invented some.

Flowers Etc. created homecoming mums for Dumas, Sunray and Fritch. Dozens of them were still hanging in the store Thursday, waiting to be picked up. The store’s front door would barely close before another customer walked in.

“We really don’t make money on the mums because they’re so labor intensive,” McAlister said. “But it’s always fun to make them and to be a part of homecoming. We like the energy.”

The change in the size of the mums and the use of silk flowers instead of fresh ones hasn’t diminished the homecoming tradition. During the game, the stadium’s stands will be full of flowing ribbons and jingling charms, pinned to girls with faces as excited as their mothers and grandmothers were when they wore theirs.

“It’s a great tradition,” McAlister said. “ The size of the mums, and the things we put on them has changed since I’ve been in the floral business, but the excitement of homecoming stays the same.”